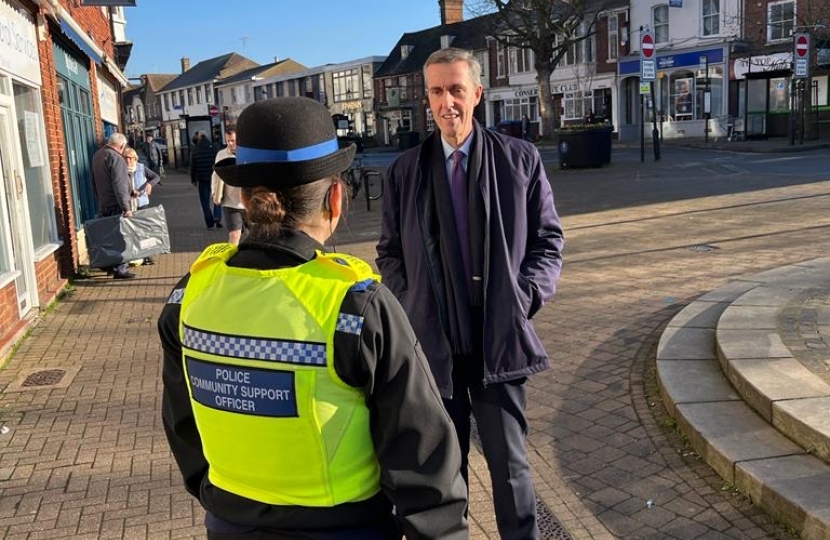 I would like to begin by thanking Bedfordshire police officers and staff for the magnificent job they do in keeping my constituents safe. I also register my disgust at those people who spit and cough over police officers, or indeed attack or try to harm them in any way.

Keeping the public safe is the highest duty of any Government. When I was first elected to Parliament in 2001, I campaigned on a platform to restore the 88 police officers who had recently been lost at the force. In 2005, I stood on a platform of recruiting an extra 5,000 police officers. Only just over a year ago, this Government were elected on a pledge to recruit 20,000 more officers, and we are making good progress on that target, with Bedfordshire having already received an additional 54 officers from that funding, and now having more officers than ever before, at 1,257. Back in 2017-18, Bedfordshire police had a budget of £102.2 million. For 2021-22, it will be £127.4 million—an increase of 25% during a four-year period. It would therefore be wrong for me not to recognise that significant uplift and thank the Government for it.

Over this five-year period, the force has made savings of £13.5 million, showing that we have also focused on efficiency and value for money. However, if we examine the budget more carefully from 1 April 2018 to the end of next month, it will be seen that the £0.4 million underspend in 2018, the £1 million underspend in 2019 and the break-even financial position for this financial year were only achieved as a result of additional special grants for the guns and gangs team of £4.4 million, £3 million and a further £3 million respectively. In other words, without those additional special grants, the force would have been £9 million overspent in the past three financial years. This is not sustainable. Indeed, anything that cannot be done for the long term is not sustainable. Those special grants cannot be relied on in the way that core funding can. What happens if they are suddenly withdrawn? That is not a secure and prudent basis on which to employ police officers.

The problems with Bedfordshire police’s budget go back to 2004, when damping was brought in. That meant that a number of police forces, including Bedfordshire, did not receive the full amount of funding that the national police funding formula said they should. In Bedfordshire’s case, the shortfall was around £3 million a year, which was the equivalent of employing around 95 police officers. It is not an accident that of the five Bedfordshire Members of Parliament who could speak in this debate, three are doing so. We have always worked in a cross-party way on this for the good of the whole county, and I have met every Police Minister to raise this issue since I was first elected in 2001.

Bedfordshire police is the best-represented police force in this debate because of the severity and profile of crime across Bedfordshire. If a school had a 25% increase in funding over four years, we might think that was a very good result. If the number of children in the

school increased by 50%, however, we might take a different view. Budgets must be looked at in relation to what they have to be used for. Let me spell out the severity and profile of crime in Bedfordshire. Bedfordshire police manages more organised criminal groups than do Norfolk and Suffolk combined. It manages 12 organised criminal groups involved with firearms, which is more than Norfolk, Suffolk, Kent and Hertfordshire combined. The police force also manages 18 identified county lines, and it ranks fourth nationally in relation to county lines, surpassed only by the Metropolitan police, West Midlands police and Greater Manchester police, in that order. In proportion to its population, Bedfordshire police force is not funded in anything like the same way as those three police forces. The issue of county lines in Bedfordshire concerns residents in the areas covered by the Metropolitan police, West Midlands police, Greater Manchester police and even Avon and Somerset police, because Bedfordshire supplies drugs to all those areas. Overall, the supply of drugs out of the county is the fourth highest in England and Wales.

All that was true before the infiltration of the EncroChat server by European law enforcement agencies in Operation Venetic. Bedfordshire police have been allocated 26 separate packages of intelligence about criminality through Operation Venetic. That compares with only 11 packages for Hertfordshire —a police force area three times the size of Bedfordshire—and no packages at all for Cambridgeshire, a county with roughly the same population as Bedfordshire. It is absolutely right that Bedfordshire police should devote resources to tackling crime that is uncovered through that intelligence, but doing so is not cheap and it comes at a significant cost in police officers and budget. That has led to a lack of resilience within Bedfordshire police, and it places the force in a difficult position. I note with great concern, for example, that one recent investigation undertaken by the child and vulnerable adult abuse team took three years to reach a successful conclusion. The result was, of course, a good one, but the conclusion could have been reached within a year. The 11 vulnerable survivors were therefore exposed to horrific crimes for two years longer than should have been the case.

The impact of all that in Bedfordshire is that our police resources get concentrated on our two largest urban centres. That dates back to a change made in October 2012, a month before the very first police and crime commissioner election, and it means that there is not an even distribution of police officers across the whole county. Understandably, the chief constable will place his resource where it is most needed, but that leaves many areas of the county with significantly less police presence than they used to have—and less than people have a right to expect, given that they pay increasing taxes and police precept for police presence in their area.

Let me illustrate that by looking at the police establishment that my largest town, Leighton Buzzard, had in 1988. Back then the town had its own police station, with 12 civilian staff, one inspector, six sergeants and 27 constables. That is a total of 34 warranted officers based in the town. There was also a 24/7 first responder presence, which is something that I want to see in all three of my towns. Other police forces in towns of a similar size with similar budgets do manage to achieve this, but they are not dealing with the crime profile in Bedfordshire.

Today, Leighton Buzzard and Linslade have eight police constables and three PCSOs operating out of the shared services site. There is also a reduced police presence in Dunstable and Houghton Regis. Many years ago, the villages in my constituency had police officers living in police houses. That has all gone, and some residents in my villages live in fear that the police will not be able to get to them in time. This has had very serious consequences indeed for some of my constituents and for a number of local businesses. There have been major incidents of modern slavery on some local Traveller sites, and 100 officers from two neighbouring forces, in addition to Bedfordshire, were required to police one Traveller funeral. That is a great deal of police resource that is not available to the rest of the county to undertake covid-19 enforcement and to respond to all manner of crime. There has also been a very large police presence at at least three other Traveller funerals.

Although we are grateful for the increased budgets and the increasing number of police officers, the resources need to be equal to the challenges they face. The Government need to be fair about the challenges facing Bedfordshire police. My constituents expect no less. Successive Governments of all political parties have continually failed to recognise the challenges facing Bedfordshire. That needs to change and it needs to do so on a sustainable basis, so that the force can plan for the long term based on its core budget and does not have to hope that it will continue to receive one-off special grants, which are not a sustainable basis to plan for the long term. The Minister said in his opening remarks that he would continue to monitor the demands on police forces. That monitoring needs to be improved, and to lead to action and change as far as Bedfordshire is concerned.