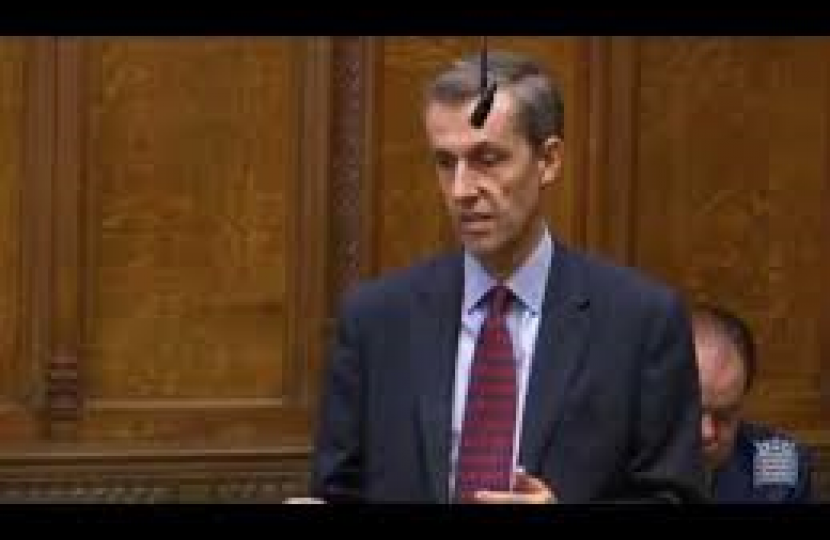 South West Bedfordshire MP Andrew Selous proposed major changes to traveller planning law in the House of Commons yesterday in order to get better outcomes for settled residents and travellers. Speaking afterwards Andrew said, “Sadly, the current arrangements for travellers are producing terrible outcomes for everyone and real distress to quite a large number of my constituents. It is time to try a new integrated approach with one planning system for everyone where all are equal.”

Andrew’s speech in parliament is attached:

I present this motion to Parliament today because current Traveller law, created with the best of intentions since the Caravan Sites Act 1968, is not working. My local authority has 40 Traveller sites. Settled residents of the area, Travellers themselves and, especially, their children and many others who live on Traveller sites have all had terrible experiences in recent years. The current policy of segregation has resulted in a failure of integration and poor community cohesion.

We are sent to this place to represent all our constituents, whatever their identity. I will set out the recent experiences of settled residents, Travellers and tenants living on Traveller sites. I want the best outcomes for every one of those groups, and I am convinced that the current legal framework under which we make local authorities work has completely failed.

A growing number of settled residents have recently written to me to say that they are now moving out of my area because they no longer feel safe, as they have been repeated victims of crime, including physical assault, theft from their home and from vehicles, especially vans, and trespass around the home. Others told BBC reporters following my third Adjournment debate on this issue in September 2018 that they wanted to leave the area because of those problems, but are not able to do so.

This disgraceful state of affairs should shame us all, and it should be a wake-up call for the Government to take action. Shopkeepers, businesses and pubs, as well as individuals and families, are regularly raising these concerns with me. Many local farmers and rural businesses live in constant fear, but that fear is also experienced by many people in neighbouring towns. Traveller ponies are often let loose over other people’s property, and levels of fly-tipping are extremely high.

I would not claim for one moment that such crimes are committed by one section of the community alone—of course they are not. There is good and bad in every group across our society, but I would not be honest if I did not point out the considerable police activity expended in relation to Traveller sites, a number of which are, in effect, ungoverned space where it is difficult to enforce the rule of law.

When I look at the standard of accommodation that many Travellers and their children are living in, I am truly shocked. In a large number of Traveller sites there is no proper sewerage system, with human excrement flowing into local ditches. Some sites do not even have proper water supplies and, in some cases, neighbouring settled residents have lost their supply of water when it has been illegally tapped into. I have repeatedly raised these issues with the Environment Agency, which has told me that it struggles to deal with them. It is also a disgrace that we tolerate such deplorable accommodation in one of the wealthiest countries in the world.

We know from the Prime Minister’s race disparity audit that Traveller children have the worst educational outcomes of any group in our society. I was so concerned about this that I asked the Children’s Commissioner for England to visit one of my local schools, which is attended by many Traveller children, and the commissioner wrote back to me after her visit to say that some children were not in school at all during the summer travelling season, which is when children sit exams that open up their life chances to all the opportunities they should have available to them. The commissioner also said that most of the Travellers talked about their children leaving school when they are 14 to 16 years old, and their educational outcomes bear witness to the fact that the home education they may or may not be provided with is not leading to good outcomes for those children. Education inclusion officers—I have some of the best—struggle to get Traveller children into school. There are also concerns about child welfare.

There is also a third group that we should remember: those who are sub-let to on these sites. Many have come to me reporting intimidation, violence, summary rent increases, and failures to provide tenancy agreements or to return deposits. There have also been not one but three incidents of modem slavery requiring massive police resource on one of my sites.

In order to deal with those issues, part 1 of the Bill would seek a unified planning system by amending the current periodical local authority reviews, which force councils to provide separate Traveller sites. Local authorities would have a duty to provide enough settled accommodation for everyone—Travellers and settled residents alike. Some 76% of Travellers already live in settled accommodation, and I have many positive examples of parents joining formal work and children attending school regularly when Travellers in my constituency have moved into settled accommodation. The measure would end the current policy of segregation, which pits community against community and leads to terrible outcomes for both settled residents and Travellers themselves.

Part 1 would also end the current situation in which local authorities that have some Traveller sites are then told by the Planning Inspectorate to build more and more sites, with a multiplier effect. My authority already has 40 Traveller sites, the vast majority of which are privately run—the authority has very little control over them—whereas other local authorities have no sites at all, which is fundamentally unfair.

Part 2 of the Bill would allow the conversion of current Traveller sites to settled accommodation to allow greater integration on existing sites. Part 3, having removed the requirement of local authorities to authorise permanent Traveller sites, would require local authorities, when there is a demonstrable need, to follow the successful policy of Sandwell Council in having temporary stopping sites, for which a deposit and rent would be paid. Such sites would facilitate Travellers in being able to travel.

Part 4 of the Bill would make unauthorised encampments a criminal offence, as is the case in Ireland, a country that is also subject to the European convention on human rights. Part 5 would ensure that schools would have regard to the underachievement of Traveller children, given that the race disparity audit shows that they have such bad educational outcomes. In the same way as we teach Black History Month in some of our schools, Gypsy culture and heritage would be taught as well.

Overall, the Bill would end the current, failed segregation policy, which causes so much misery to the communities affected, allow current sites to become properly integrated into existing communities, allow Travellers to travel on properly authorised and regulated sites, and take steps to deal with the huge levels of illiteracy and underachievement among Traveller children. It is a balanced, humane package that would end the misery that so many settled communities endure at the moment and deliver better outcomes for Travellers themselves.

The Government are examining the submissions to their consultation on unauthorised encampments at the moment. Although that significant issue absolutely needs to be addressed, it is only one part of a much wider issue of which the Government need to undertake a complete review. For too long, the Government have ignored the mounting evidence of the failure of their current policies; all I see is misery, criminality, mounting frustration and real anger at those in authority. As Members have pointed out in previous debates, there is not much point in getting elected to Parliament if it is not possible to do anything about these issues. Current policy contributes to the undermining of our democracy. I know that the inertia bias or the tyranny of the status quo is a significant influence over Governments of every composition, but we are elected to bring about policies that are truly compassionate, that genuinely work for all in our society, and that are based on the evidence of what is happening in our constituencies. I commend the Bill to the House.”